I hope your week is going well.

So I have a few announcements to make. I will itemize them.

Well, that’s all for the announcements. Thank you for your time here.

And here’s another teaser from Stranger In Lagos.

That night, Tope died. She was placed in a carton by the nurses. Daddy drove to the hospital to get mommy. He brought her home, tucked her in bed and placed me in her arms, but I was told that she wouldn’t touch me. Rather, she lay there all night and stared at me. By morning, the hospital rang the house and my parents were asked to come and pick their baby, who had by some miracle, returned to life in the middle of the night.

Tope was brought home a month later, enough time for mommy to disconnect from me.

The years that followed were hard on all of us. Mommy faced a life where daddy was never around. If it wasn’t business taking him away, it was a certain woman who lived down the street. Mommy knew about her but she was a typical Nigerian wife who was advised not to bother herself with her husband’s extracurricular activities. On balance, he provided for his family and gave them everything money could buy. Why was she being ungrateful?

She was asked to concentrate on her children. And this, she did. The only problem was that I didn’t count as one of her children. Tope was first and then there was Leke, my elder brother, who got more attention than I did. Sometimes, I would catch mommy staring at me with eyes that made me want to run and hide under my bed. At an early age, I understood what contempt meant. It was something served to me by her and when I was full of it, I served it to Eyitope.

As we got older, the responsibility of caring for her fell on me.

“Eni, take this koko and give to your sister,” mommy would say, placing a dish of guinea corn pap in my hands. “Don’t force her or she’ll vomit.”

I would hold the dish with small, shaky hands and walk to the living room where Tope would be seated, playing with toys in a manner that invalids do. For a long time I would stare at her, wondering why she would not just get up and play with me. Why she always had to sit around and speak like there was hot coal in her mouth. She couldn’t even call my name properly, and sometimes she would soil her pants, and I would get scolded for not picking out the stench of her mess on time.

Tope got the best clothes, as skinny and ugly as she was. Even her useless feet that could go nowhere were blessed with the prettiest ballerina shoes. Mommy always tended to her thick, long hair and manicured her equally-long fingernails with much concentration and love. She would call her beautiful; but I knew I was the beautiful one. Daddy never failed to remind me. He was nothing like his wife. He loved his children equally. I can’t ever recall fighting for his attention each time he was home.

But he hardly ever was. Mommy said the other woman, whom everyone called Aunty Ada, was responsible for his absences.

“Useless Igbo witch! She has locked your father in a bottle! God will punish and destroy her!” mommy would curse as she combed my stubborn hair. I didn’t understand why she always waited until it was time to groom my hair to gripe about her broken marriage.

“Prostitute! Sleeping with people’s husbands up and down! Jehovah God will visit her with thunder and lightning soon!” I would get a smack on the shoulder from the comb in her hand for no reason. “Your hair is thick as a forest with wild animals!”

A forest alone could have been okay. But she always loved to add the wild animals in it. That was how much I suffered.

As I grew older, I began to understand that it was because I took after my paternal grandmother in likeness that I was so despised. I was fair in complexion with rose-red lips and a promising hourglass figure. Even at a young age, everyone could tell that I would make heads turn in my future because of my curves. But mommy constantly reminded me that I looked nothing like her.

“Do you know what black beauty is?” she asked me one day, while oiling her skin with a mixture of Shea butter and coconut oil. She stretched out her hand to me. “This is black beauty. The same type of skin your sister has. Unlike your borrowed color. I can bleach myself and get your skin but you can never get mine. I don’t know why you came into this world looking like that old woman.”

If there ever was a pair that was metaphorically oil and water, it was mommy and grandma. Even if they were tossed into a pot and left to boil together to make soup, they would come out as the handiwork of a woman who had never entered a kitchen before.

I would learn years later that grandma, before my parents got married, did all she could to ensure that daddy never tied the knot with mommy. She had warned him that mommy would bring him sorrow but it was said that daddy was too in love to take heed to his mother’s warning. It was also from grandma I learned a lot of things about my parents’ dysfunctional marriage.

I loved the old woman, nonetheless. And she loved me back a hundred fold. She used to call me her mirror. She’d say, “If I want to see my reflection, I’d look at you.”

She didn’t care much for Tope, but she was a lot better at hiding her indifference than mommy was at showing me her disdain. Unfortunately, grandma lived in the north and I only got to see her once a year. Parting with her was always a painful affair. She would cry and so would I. At each departure, I fell ill and mommy nursed me. Only in such moments did I get a taste of her love.

Mommy was not all thorns and thistles. There were times when she seemed soft and open-minded. No one knew what triggered those occasions. But I was too unloved and too young to care. I’d simply dive into the love she was offering and like the fool I was, hope that it would last forever. But every single time, she broke my heart. And in my own predictable way, I would go right ahead and unleash my pain on Tope.

The day I killed her, mommy had flogged me with a stick she broke off a branch of the guava tree Leke and I loved climbing in our backyard. She had sent me to a provision store to buy a bottle of coke which I knew she would share with Tope alone. But Aunty Ada’s daughter, Halim, had stopped me along the way to show me the new doll daddy had bought for her.

“My daddy?” I asked, bearing a frown.

In jealousy, I replied, “I know what a Barbie is! I have plenty of them!”

And that was the truth. Daddy spoiled us so much that Leke, Tope and I lost count of the toys he got for us on his trips outside the country.

“Why did my daddy give you a Barbie?”

“I don’t know. But you want to come to my house and play with me? You can bring your own.”

Her offer was tempting but I felt a sharp pain on both ears from the memory of mommy pulling them the last time she warned me never to speak to Halim or Aunty Ada, let alone visit their house.

“My mommy said she’ll beat me if I come to your house.”

Halim looked equally sad. “Even my mommy too.”

“My mommy said it’s because your mommy has chooked my daddy in a bottle.”

Halim put out a confused face.

“She said your mommy is using juju on him,” I added.

And it was at that moment I heard my mom’s shrill voice from her bedroom window.

“Eniola, if I come out of this house right now, I will kill you and that small witch you’re talking to!” she shouted in Yoruba. Tears immediately filled Halim’s eyes.

“I’m not a witch,” she said to me before walking away.

I felt sad, watching her go. I was actually fond of her. She was the happy and playful type. 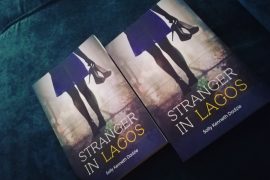 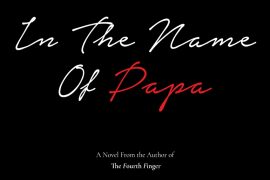 In The Name Of Papa #14
The Marriage Ultimatum #7 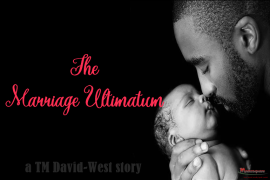