Today, there’ll be  no fresh episode of The Fourth Finger.

I’m also not going to be on radio. I canceled for personal reasons. It’s also why I’m not posting anything here today.

I hope to be back next week, as God desires.

However, I want to talk about the last episode and the relationship that existed between Christie and her brother, Solomon. I got two messages from two separate readers. One, good and the other that made no sense to me.

The other that made no sense to me was basically angry (and I don’t know why) that I brought up the topic of incest and ‘blamed’ it on Christianity. Then he went ahead to remind me that I was a child of God and I should not be writing such things that don’t edify the body of Christ. And in the end, he adds, ‘cool down with the sex scenes.’

I did not reply him. See the thing is, he’s not the first. I get this from time to time. People telling me what I should and shouldn’t write. Telling me I’m a Christian and should write Christian literature. I used to be upset but now, I don’t bother. Rather I encourage them to go write theirs.

Quoting the concerned brother: why is it Christie, the Christian that is a cheat and the one that committed incest. What are you portraying?

Chai. Idiots do exist on our plane.

Oga, please write about your perfect Christians and please share it with us.

I’m tired of you spiritual bullies.

My stories are a depiction of life. Sometimes I’m not teaching any lesson. I’m simply telling it as it is and leaving the reader to learn from it because that is life; no one stops at a milestone in their lives to ask you if you’ve learned from observing them. We gain knowledge with time and experience. My writing imitates life. I bring to you imperfect people, sinners and the flawed and you love them because that is what we all are. If you’re looking for saints, go to heaven. Them yapa for there.

So back to Christie’s abominable past.

It’s a true story, altered by me. I knew the family back in Jos. I’d give more details but I don’t know who I might be hurting.

There were three kids. Two boys, one girl. Rich parents but very strict. They were home schooled. Nobody knew the age difference between them but they all looked about the same height, with the elder brother being taller. It was said the girl and the younger brother were twins. No one knew. The first time people recalled seeing those kids in school was during junior WAEC. Each day during the exams, they came with their driver and stayed in the car until the exams started. The driver would wait until they finished and then they’d get into the car and drive home. They didn’t talk to anyone.

Three years later, they were back for the mock exams that often preceded SSCE. The boys were more sociable but the girl was withdrawn. The elder brother, it was learned, was a dunce and had barely passed junior WAEC. It didn’t seem like he was going to pass the mock or SSCE either. He was more interested in girls. According to gist, the school authorities insisted that they attended classes after mock or find another school to do their SSCE. Thus, the kids started classes.

Both brothers continued to be friendly while the girl remained withdrawn. But soon she made friends with a couple of girls in her class and began to tell of their life at home. No TV, no radio, only educational books and no friends. The minute they got back home each day, they had lunch, napped and woke up to study. After that was dinner and bed. They hardly even saw their parents, who were both always busy.

But the girl didn’t stop there with her stories. She told more, shocking tales that left her mates baffled.

She had engaged in sexual relations with her elder brother and was scared that she might be pregnant, having missed her period. She didn’t know what to do. Of course she had told these ‘friends’ of hers in confidence but in no time, it became gist and it got to the school authorities.

Well nobody ever knew what happened to them but I remembered wondering, each time I passed their house that had the high fence and tall trees, if they were still locked in.

So that, my people was my inspiration for Christie’s story.

I want to thank the other person who sent this email.

Hi Sally,
I jus read episode 13 of TFF and I’m speechless. Thanks for bringing the topic of Christie’s Incest up. These things happen,, I know that for sure. I’ve experience something similar in my family, tho the baby was aborted at almost 6months.it shook our entire Fam up. Till today, we have not recovered.
People that are saying Christie should talk, how does she tell her hubby this type of abominable thing. Is not easy o.
Sally I love you cos you know how to make fiction reality.
God bless you mama

So my people, there you have it. Shit happens, whether we like to hear about it or not. Incest occurs a lot more than we can ever hear. There are children birthed from such relationships. It’s depressing to know but hey, that’s life.

And this leaves me with a question for you guys:

Should Cyrus Junior ever be told the truth about his real father? 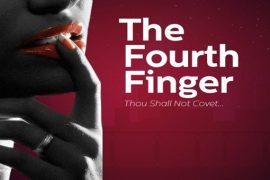