‘Roses and Thorns’ is back. I have been away because I have been concentrating on publishing my book. If you want more stories like this, then head over to Okadabooks and search for my two books, ‘Bullets and Roses’ and ‘Fallen Angel’. Thanks for following this story; I have been reading your comments and they are all appreciated. To all Tehilah fans, you rock!

It was the wedding day of Haliru and Tehilah. The city of Lagos was agog with talks of the impending nuptials. Everyone used Haliru and Tehilah’s pictures as relationship goals. There was no mistaking the intense love Haliru had for Tehilah, it showed in the way he looked at her. He was always caught staring longingly at the chocolate beauty.

Tehilah’s dress was designed by Zazi couture, a household name in bridal fashion, with a luxurious flagship store in the heart of Lekki. The dress was cream coloured and diamond embellished, with a full tulle skirt, cinched at the waist with a sewn in corset. The neckline was high necked, emphasizing Tehilah’s longish neck and ‘hanger’ shoulders.

“You look amazing!” Bimpe said, with eyes shimmering with tears. She felt emotional, seeing her friend who had almost committed suicide because of a man, getting married to the most sought after bachelor in Lagos, in a high society wedding.

“I am so happy for you, my friend. No one deserves this more than you do.” Bimpe pushed her skepticism about the marriage, to the back of her mind. She could see happiness in Tehilah’s eyes, and that was all that mattered.

“Thank you, so much.” Tehilah forced a smile. She was happy, because she knew Haliru would take care of her and her child. She was also happy, that her child would get a stable home with two parents who loved him and not in a mess with someone’s husband as his father.

Yet, despite her happiness, she couldn’t seem to shake the feeling that something bad would happen at her wedding, and that somehow her marriage to Haliru would not pull through.

“Come on, it is time to lace up the corset.” The attendant that had been sent from Zazi couture said as she led Tehilah to the mirror, and fastened the lace on the corset.

She heard Haliru’s voice outside, and rushed to the window to see. Her heart was in her mouth and she did not know why. She heaved a breath when she saw that he and his entourage were boarding the Limousine for their journey to the cathedral, where the marriage would take place.

“The groom is already on his way.” She said with a relieved smile.

“The reason we should do the final touchup for your makeup.” Bimpe said while beckoning to the celebrity makeup artist and her girls.

“Yes, I am finally getting married and there is nothing Wale can do about this child, anymore.” Tehilah mused. If only she knew that a surprise was being cooked for her.

While Tehilah was driven to church in sparkling silver Lamborghini, Adara was bading farewell to her ex lover and pimp.

“Romeo, do not let me down. I will not tolerate any mistakes.” She said with a glare. The rounds of rides she had given Romeo all through the night couldn’t be a waste. This was her time of victory and she could not bear anything coming in the way.

“Trust me, that chick will never reach the church for her wedding.”

“Follow all my instructions, all right?” Adara did not know what she would do after she had Tehilah in her hands, but she was sure that she would never let her see the light of day ever again.

“Or come near my Haliru for that matter.” Adara flipped her hair to the side and walked away.

Dressed in a figure hugging mesh dress, she was ready to go to the church for the wedding, in order to get front view to Haliru’s disappointment, when his bride does not show up at the church.

The driver looked in his rearview mirror again, and this time he was sure that the same black car had been following them for a while. He swerved into a side street, and as expected the black car took the same move. Having never experienced this before, he was thrown into panic. His hands holding the steering wheel became wet with sweat.

Bimpe who was seated directly behind the driver did not notice his unease, but Tehilah was quick to. She noticed the driver kept looking in his rearview mirror, and shifting uncomfortably in his seat.

“Mister, is anything the matter?” Tehilah asked and turned to look behind. She saw that the black car behind them was driving too close for comfort. Were they being followed?

“Oh no, Wale is trying to stop the wedding!” she blurted out, which got Bimpe’s attention.

“What is going on?” Bimpe removed her ear pods at the same time she realized they were in a dirt path.

“We are being followed,” the driver replied just as the car behind rammed into them from behind and toed them to the edge of the road.

“Oh no, my instincts were right!” Tehilah cried hysterically.

“This is a Lamborghini, you can do something to drive away whoever is assailing us.” Bimpe said even as fear filled her eyes.

“It is Wale, this is his plan to stop my wedding.”

“Whoever is there wants us dead. This isn’t Wale.” Bimpe replied, just as the car behind rammed into them again, this time their car tilted to the side, almost being run out of the road and into the valley.

Romeo’s eyes flashed with mischief as he remembered Adara’s instructions; he was to kidnap Tehilah and keep her in captivity, untils he could decide what to do with her.

“But I am going to help her make a decision. Kidnapping her would set the police after whoever kidnapped her. But if she dies in an accident, matters closed. Then he could use this knowledge and blackmail her. In the past, they had blackmailed wealthy men, but this time, he would blackmail her for all the riches she would get after marrying Haliru Bamanga.

“Too bad, the pretty girl would die.” He laughed as he gave a final ram, which tipped the Lamborghini over the edge of the road, down a steep slope into the valley below.

He watched as the car rolled and rolled, before tumbling over at its final resting point. Romeo smiled as fuel began to leak out of the car.

“It will only be a minute, before the car bursts into flames. Oooh…fiery death.” He brought out his camera and took shots, and then he turned and walked back to his car.s and Thorns 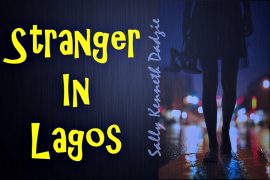