It was a new day and Tehilah was looking forward to the meeting with the representatives from the fashion company. She was about to sign a delicious endorsement deal. When she decided to publish her novel, she never imagined that she would become a celebrity through her books, but alas, she was crushing she had not even set for herself. Her life was almost like a fairytales, except for a few thorns among the roses.

After donning a bespoke pant suit from Diva Couture, a celebrity clothe brand, and completing her outfit with a pair of Jimmy Choo, she got ready to sign that deal and take pictures while at it. The events of last night were all a distant memory, and even though she was serious about kicking Adara out of the company, it was not on the top of her priority list. Her main focus was getting a deal that would keep her in the limelight all through her maternity leave. No matter how she wanted to keep drama away from her and her baby, drama had just arrived on her doorstep.

She opened the door of her house and starred into the face of the source of her nightmares. The foyer light illuminated his face and on it was a cocky smirk. He dropped his duffel bag and spread his hands out.

“What are you doing here?” Tehilah said in the calmest voice she could muster.

“What…not even a hug? After all, we are having a baby” Wale’s eyes had a wicked glint, like he was geared up to cause trouble for Tehilah. In truth, he was angry at finding that Tehilah was supposedly cheating on him. He had thought she was the victim, but it was obvious that their relationship had meant nothing.

“I see you are going mad. You will leave this place now, or I am calling security” Tehilah made to move past him, but he held her by the arm and pushed her back.

“Was becoming a famous writer so important that you had to sleep with your publisher?” Wale asked and used his hands as a barricade to box her in as he looked down on her with disgust.

“You have no right to say anything about who I am sleeping with. You had a wife and you denied her all because of what?”

“We were done, we were on our way to getting a divorce. She wanted divorce and I wanted someone I could start afresh with” he yelled. For a brief moment, Tehilah could see the hurt in his eyes, bfore they became hard again.

Wale found himself explaining his actions to Tehilah, when what he actually wanted was to shame her for cheating on him. He had to admit to himself that it hurt him to know that she had been playing with him.  Still something was wrong. He wondered at what point Tehilah had started going out with Haliru, because he remembered Haliru seeing them together on many occasion. Haliru knew they were dating, so why was he all right with it?

“Could it be that I am the bigger fool in this game?” he pondered.

“I hate you, Wale and I don’t want to ever see you again. Let me be clear, the child I am carrying is not yours and will never be yours”

“Hate me all you want, I don’t care. If that child is mine, I have a right to it too” Wale yelled.

Holding firmly to the wall behind her to stop herself from fainting, Tehilah turned her face away, to stop the threatening tears from falling. He couldn’t know that she felt hurt by his actions. She had loved him with all her being. It was the first time after the bad breakup that almost killed her, and she had given it her all, with no reservations.

“Oh How I had been so wrong” she thought. Wale felt no repulse and did not care about her. He only wanted his rights to the child. Right there, Tehilah swore, that she would never let him come near the child.

“Perhaps I am being selfish, but he does not deserve my child. No, I won’t let him” she turned to Wale and with fiery eyes gave him the news.

“This child can never be yours, because I always took the morning after pill. I didn’t know you were married, but somehow I knew I did not want to be forced into spending the rest of my life with you. You weren’t up to the standard”

“So what are you saying?” Wale asked in a low voice. Tehilah’s words were like daggers piercing into him in different places.

“I am saying that, Haliru is the father of my child and we are getting married”

They both stood and stared at each other. Wale was at a loss for words; all he could do was stare at her and really look. He saw her body was becoming fuller and it brought back memories of the nights and days they had spent in bed. He remembered how her body had responded to his every touch and how she always cried when she climaxed. He didn’t forget the smothering look in her eyes whenever she said she loved him. There was no way all that was a lie.

“You are hiding something and I am going to find out. I am going to demand for a paternity test before the child is born. I will not let you take my child to another man”

Wale was convinced that Tehilah had loved him. He was almost sure she had not cheated on him. Almost…

The impasse was broken up by the buzz of a phone. Wale looked down and took out his phone, while Tehilah took the time to make her escape. As she rushed to her car, she knew exactly what she would do to make sure Wale never got any rights to the child in her womb. The key was with Haliru.

Across the street in a rented car, Onome sat and watched the drama in front of Tehilah’s house. She was too far away to hear what they were saying, but she could see they were having a heated argument. She was so sure that it was about the baby.

“I am already losing. What do I do? Onome think fast” her mind raced as she looked for a solution.

She took out her phone and dialed Wale’s number. “Baby” she sounded sunny, with a lot of excitement in her voice. “Finally, our prayers have been answered, and my visits to my gynaecologist has paid off” she said and waited to see if Wale could guess.

“I am not ready for your riddles this morning. Please say what you have to say, I am at the office and in the middle of something” Wale said impatiently.

“You lying bastard!” Onome thought. “I am two months pregnant!” she said instead.  Then she regaled him with tales of the night they had sex after she came home.

“If I had not come home that month, this miracle would not have happened. I am so happy”

“Uhm, we will talk about this when you come home, all right?” he hung up, just as Tehilah’s car zoomed off into the road.

He did not know how to feel about the news of Onome’s pregnancy. He had waited for this to happen, but it never did. Why now, when he was no longer interested in the marriage. Was he going to abandon his child? For what reason would he do that? It was not like Tehilah was interested in having anything to do with him.

“Perhaps, this is a sign that I should let Tehilah go and try to work on my marriage. Perhaps the child will mend what has been broken” he soliloquized.

Is Tehilah right in wanting to keep the child away from its real father? What does she plan to do, and would Wale stick to his decision to stay away from Tehilah, or will there be an unexpected twist? Share your opinion in the comments. 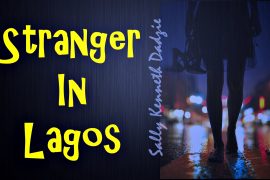