As Tehilah walked into Haliru’s office, she couldn’t help, but be scared of the outcome of their meeting. While driving to the office, she had thought out her plan thoroughly. There was only one way to send Wale out of her life and the life of her child and if it meant living with the consequences forever, she did not mind.

“He doesn’t deserve this child” she thought, to quiet the raging voice of her conscience.

“My favorite woman in the world…” Haliru began the moment Tehilah stepped into his office. Her mere presence flooded his heart with joy and all he wanted to do was kiss her and tell her how much she meant to him, but he knew Tehilah would rebuff him. However, the smile died on Haliru’s lips when he noticed the worry in Tehilah’s eyes.

“Haliru, we need to get married” Tehilah dropped the bombshell.

Haliru stood up abruptly from the swivel chair and walked up to Tehilah who was pacing. “What is going on?” he asked.

The last time he met her, she was telling him she couldn’t love him, why did she suddenly want them to get married? He placed a hand on her shoulder and guided her to the loveseat. Tehilah turned to him and she could not hold back the tears. She rushed into his arms and sobbed, wetting the front of his sky blue cashmere sweater.

“He accosted me at the door this morning, on my way here. He swore he would take over the custody of my child by saying I am a loose woman, who slept with me for fame”

Haliru was enraged, he got up from the loveseat and began to pace. He was deep in thoughts. The fact that someone could do this to the woman he loved was unthinkable, and he was ready to give Wale the shock of his life. He rushed out of his office without a word to Tehilah.

“Haliru! Where are you going?” Tehilah called after him, but he did not reply.

When Tehilah was sure he had left the office, she wiped her face and on it was a dry smile. She was not as shaken as she had made Haliru believe. She was in control of the situation and this was the only way to force Haliru to make that decision. She wondered if her plan worked. It was the first time she manipulated someone, but perhaps it was time for her to stop being manipulated and become the manipulator. If Haliru agreed to marry her, he could claim the child in her womb and even though Wale found out the child was his, it would be irrelevant because in any law court, the husband of the woman would be the biological father of the child.

“This has to work” she thought and smiled when she imagined Wale’s face, after finding out that he would never have any right to her child.

Haliru called his lawyer to ask him about child rights. “You know how Nigerian law is, there are lots of grey areas. Still, our customs does not give child rights to a man who didn’t marry the woman. So the child belongs to the husband of the mother” his lawyer explained to him.

“Thank you Barrister, I will come to the firm soon, but first there are things I should take care of” Haliru hung up and walked into Viera jewelries. The smiley faced sales girl rushed to him the moment he set feet in the sparkling flagship store, with transparent marbled floors and sparkling jewelries shining from their glass casing.

“Welcome to Viera sir, how can we help you?”

“I want the best engagement ring you guys have” he replied. This was not the way he imagined getting married to Tehilah. He wanted to make her fall in love with him, but if fate had made this so, then he was willing to go ahead.

“I love her and in time she will come to love me as much as I do her” he thought.

“Sir, we have the sun and moon ring, it just came from Alrosa in Russia and is the costliest we have ever sold. It is made from the richest form of diamond and gold, and…”

“Let me see it” Haliru cut her off and he was led to the inner room. It seemed the jewelry was too precious to be displayed.

With the small black box in his pocket, he hurried to a boat restaurant and booked the whole place for the evening. Even though they weren’t marrying the right way, he was going to make everything memorable for Tehilah. He brought out his phone as he stood beside his car in front of the boat restaurant and called Tehilah.

Tehilah was in the editor’s office going over her manuscript when her phone buzzed. Her heart leapt when she saw it was Haliru calling. Since he rushed out of his office without saying a word, she had been so apprehensive. She could barely keep her attention on the manuscript and what her editor was saying, or she could think about was, “What if Haliru didn’t want to marry her?”

“Excuse me” she said to her editor and rushed out to her office. “Hello Hairu, where are you?”

“I am out running errands; I might not come back to the office. I am inviting you to dinner at the Cruise boat restaurant”

“Wow, really” Tehilah was awestruck by the suddenness of the dinner invite.

“Yes and wear something romantic” he said and chuckled. “Leave your hair down, I might stick a rose in it”

“Oh…oh…ok” Tehilah couldn’t help but smile. This was a whole new side of Haliru she didn’t know existed. He was flirting with her!

She dropped the call and she had no doubt that Haliru was going to marry her. She didn’t bother going back to the editor’s office, but grabbed her duffel bag and rushed out to her favorite fashion store. She needed a special dress for a special evening.

Onome had to go back to Abuja, but she didn’t leave without keeping an eye on things. She hired a private investigator to monitor Tehilah and report to her. She was lounging in her bedroom, reeling from the injections she got from her gynecologist before coming to Abuja, when her private investigator called her.

“Yes, your subject just got proposed to” the voice on the other end of the phone said.

“By who?”  Onome sprang up from the end and regretted it when she felt a sting at her lower abdomen. 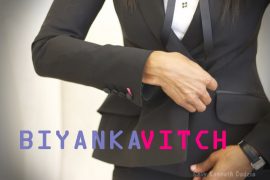