RACHAEL AND I were in love, crazily in love, with each other. It was pure bliss. I was residing on cloud nine, sharing my life and aspirations with the girl of my dreams – or so it seemed.

From the moment we actually became a couple I assumed full responsibility for her. You see, I was raised with the notion that a real man ought to treat his woman with utmost respect, handle her delicately, and take great care of her – meeting her every need, as humanly possible as he could. My father perfectly modelled this concept. What better example did I need? None!

So, with this view firmly tucked in the recesses of my mind, I paid for Rachael’s campus accommodation because she lived quite a distance from UNILAG. I regularly bought her gift items such as clothes, bags, shoes, jewelleries, and other related things. I also saw to her feeding.

Like I said in the previous chapter I was earning some money as a part time home tutor. Aside from that, I also made money from teaching students (who were offering Quantity Surveying) from other higher institutions such as Yaba College Of Technology, Lagos State Polytechnic, Obafemi Awolowo University and Federal University Of Technology, Akure.

These students, acting on strong recommendations from students in my department, as well as in others, all came to UNILAG for me to lecture them. And, boy, I didn’t come cheap…not when I saw to it that the students got more than their monies’ worth.

In addition to these sources of income my close friends and I ran a kind of Mini Business Centre in our hostel room. We had two desktop computers and a printer; and we received regular patronage from students in various faculties of our school who wanted their documents typed and/or printed out. We kicked off the business in our sophomore year.

Furthermore, my pocket money, which wasn’t bad, from my parents, always came in handy, where necessary.

So, taking care of Rachael’s financial needs wasn’t really a problem, as I had cash to burn. I can’t exactly remember ever failing to give her money any time she requested for it. But then, I have to admit, she wasn’t exactly the demanding type – those who regarded their boyfriends as nothing more than ATMs.

One of my friends was dating one of such money-minded girls at the time. The girl treated every inch of their relationship like a business transaction. Can you imagine paying cash to spend time with someone who is suppose to care about you? Who does that? A good answer is: a prostitute! And that was exactly what my friend’s girlfriend turned out to be; she wasn’t even a student of UNILAG! But pretending to be one was good for business, as it usually upped her price with her customers…who gladly paid her fees since they fell under the illusion that they were bedding a ‘clean’ girl.

My friend broke up with her with lighting speed the day he learned the truth. Worried sick that he might have picked up some kind of venereal disease, since he and the girl had indulged in skin-to-skin sex, severally, he eventually found the courage and went for a medical test. He nearly lost his mind to worry as he fretfully waited for the test results. Thankfully, everything came back negative. My friend was so relieved that he threw a little party in out hostel. Aside from us, his friends, no one knew the real reason behind the merriment. Well, no one cared; as long as the food and, especially, drinks went round.

As far as Rachael’s academic needs were concerned I was also on point. Naturally, I helped her out with virtually all her assignments. And when it came to the class tests and examinations, I usually read her lecture notes and handouts; and then marked out areas from where I felt questions were most likely to be set. I could do this because, to a large extent, I knew the mode of setting questions adopted by each lecturer in my department. Believe me…I was that good. So Rachael was on a strong second class lower.

When it came to the area of the physical I never pressured her for sex. I was willing to wait, if need be, until we got married.

Now, this doesn’t mean we didn’t relate intimately. We both weren’t logs of wood you know; no, sir, not with that hot body of hers. We normally kissed – sometimes passionately – and cautiously caressed each other. We’d mutually agreed not to take it any further than that. But how often do we really keep to such agreements without breaking them…not even once?

One cool evening, we were alone in my hostel room, chatting as we played a game of cards. Somehow our discussion veered off into sexual-related matters. A few moments later, Rachael stood up, turned around, and bent to pick something from the floor. The view before me was too titillating. I couldn’t help myself. Junior couldn’t help himself. Like a man in a trance I reached forward and grabbed her from behind. She let out a surprised yelp…but soon quietened down and relaxed. And then some serious smooching began. We were in the process of ripping our clothes apart in readiness for what would, no doubt, have been earthshaking sex when an unexpected knock on the hostel door had reset our sex drives to zero.

We were both annoyed and relieved at the intrusion; annoyed that we’d been obviated from screwing ourselves silly, and relieved that it was perhaps best that we had been interrupted – since we’d agreed to save ourselves for marriage.

My intense love for Rachael was quite obvious to everyone. Honestly, I became literally obsessed with her. I could do anything for her. Okay, scratch that; I could do anything legal for her. At various times my friends, and others who knew me, advised me to take things slow and easy – but I turned a deaf ear. I was a ready captive in love’s prison.

I have to say here that one of the reasons I fell, and fell hard, for Rachael was because she told me she was a virgin.

A virgin? You have got to be kidding me. With this tight body of yours? And from what you told me…with more than a few male admirers? Come on, girl, stop playing with me.

When she saw the dubious look on my face she invited me to examine her with my fingers. Her invitation was quite tempting. And as much as I would have loved to conduct such a fleshy examination I didn’t. The earnestness of her confession was all the conviction I needed.

The thing was…I’d always wanted to marry a virgin. I had been secretly praying for one. So, you can begin to imagine the weight of what I felt for Rachael – especially after her ‘I am still a virgin’ confession.

She and I won the Best Couple Award for that year – that is, the second semester of my fourth year – during the occasion of our department’s gala/award night. 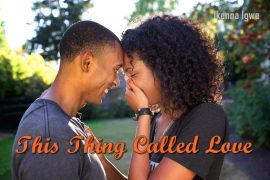